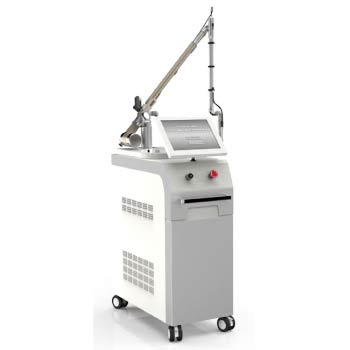 AE-1000 adopts laser blasting effects and the theory of selective absorption. Then high energy laser pulses will act on the pigment tissue, after the laser shock, the pigment tissue will dilate rapidly. The thermal relaxation time of laser pulse is much shorter than that of melanoma and tattoo, so the pigment tissue will generate mechanical oscillation wave and then be broken up after absorbing laser energy. The fragmentized pigment granule will be excreted to the outside of the body through metabolism and phagocytosis of macrophages. Thus, the pigment will be removed. Meanwhile, the laser beam can penetrate into corium layer to activate the tissue, accelerate cell regeneration in order to get the following effects: wrinkle removing, skin whitening, skin rejuvenation and skin quality improving.